Production of these hovercraft commenced in 1967 by Hover Air in Peterborough UK on what was thefirst ever mass produced commercial two-seat hovercraft. of its time, they came complete with futuristic gull wing doors, two rotary engines for thrust and another for lift. This combination together with the twin rudders made for one of the most manoeuvrable hovercraft ever built, even by today’s standards.

A total of 121 Hoverhawks were produced between 1967 and 1971, making this a large production run for something of such a unique ability.

Sold to many countries for a very wide range of uses, including predictably, the Army, Navy and Coastguards, as well as many other private leisure and commercial sales, many of the survivors have been tracked down over the years by Warwick Jacobs of the Hovercraft Museum. They have the largest collection of these rare survivors in the world and are an amazing place to visit for any hovernauts!

Our Hoverhawk Mk 3 is number 113. It was used by the factory as a demonstrator and was sold off in 1971 with the company went bust. It travelled to Flambards Amusement Park in Cornwall as a static display item. It remained there for many years before being sold off to an enthusiast who cut the back off to fit a bigger engine.

Two more changes of ownership and we managed to acquire it for the collection. The advertised ‘just a bit of rubbing down before painting’ has so far turned into over two months of full time grinding out of the thousands of ‘crows feet’ cracks in the fibreglass and re gel-coating. The engines have all been reconditioned and soon we will begin the repainting and rebuilding. Our aim is to achieve the best looking restored Hoverhawk in the world! 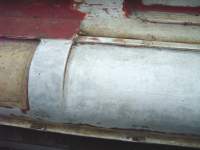 The most exciting event in Hoverhawk history was when Sir Ranulph Fiennes used two early Hoverhawk’s, nicknamed Baker and Burton to journey up the ‘White Nile’ in 1969. Baker unfortunately fell off a lorry whilst being transported and fell down a cliff. The remains were left with the district commissioner of a place called Bor to scare hippo's away from his garden plot! Burton completed the journey. The story is particularly fascinating for its description of the various operating conditions they met and how they affect hovercraft performance.

Hovercraft travel faster over a hard flat surfaces like sand or dirt than over water or grass. This can become critical when transitioning from one surface to another. Travelling fast from land onto water without slowing down can lead to the hovercraft ‘pitching in’. Travelling from water to dry land can lead to the reverse, as the hovercraft will speed up. Several people have ended up in the car park by accident instead of stopping on the ramp when they came out without slowing down!

On water, the air from below the skirt blows a depression into the water surface. When the hovercraft tries to move forward, it has to get out of this depression and this is called ‘getting over the hump’. Once it is over the hump, it can travel faster for less power. Our Hoverhawk Mk 3 can travel at 45 mph (75 Km) on land and 35 mph (58 Km)on water.

Stopping on land is carried out by reducing lift, until, the skirt touches the ground, slowing the Hoverhawk down and then rapidly dumping the lift via special dump valves. The Hoverhawk has a separate engine for thrust and is therefore more controllable in this respect than a hovercraft with only one engine for lift and thrust. An early mistake commonly made when beginning to learn in a single engine hovercraft is to pull back on the throttle when needing an emergency stop. This also stops the lift and they can hit the ground and turn right over.

Try the Hovercraft Club of Great Britain for more information on events and handling. If there are other clubs out there that would like a reciprocal link then contact us.