The world's only drivable submarine

Imagine a superb 'film quality' exhibit of a futuristic, shark like underwater travel machine coupled with novel but practical engineering methods of pressurization, stabilization and the ability to drive on land and you have the Amfibidiver.

Rescued from a field in North Wales, this vehicle had been completely stripped of almost every working component other than partial running gear and remnants of a hydropneumatic suspension system from a Citroen 'DS'.

We were lucky enough to obtain this vehicle from a public events company in Sussex, who had built it as a spatial disorientation vehicle for team building games. At just over 5 metres long, this is one of our most portable and entertaining exhibits. In great demand for both internal and external functions and educational experiences of all kinds.

From the German 'Father of Amphibians'

An amphibious car of real historical importance due to its place in its designers history.

This was apparently built by a marine engineer to his own design and after having researched the subject for around two years.

Produced at the Dutton factory, Littlehampton in the UK, Tim Dutton continues to be either the only civil manufacturer of road legal amphibious cars or one of the very few. This highly driven and amazingly creative engineer simply keeps going as other try and fail.

An exquisitely constructed mini DUCKW - sort of! Made from beautifully varnished light timber and plywood with full on land and water ability. Found in a famous toy auction house at Stockton on Tees, this ‘one off’ crazy piece of amphibious invention, came complete with an electric outboard motor for use on water and steering and leaf spring suspension for the land part of the operation - but we could not leave it there. 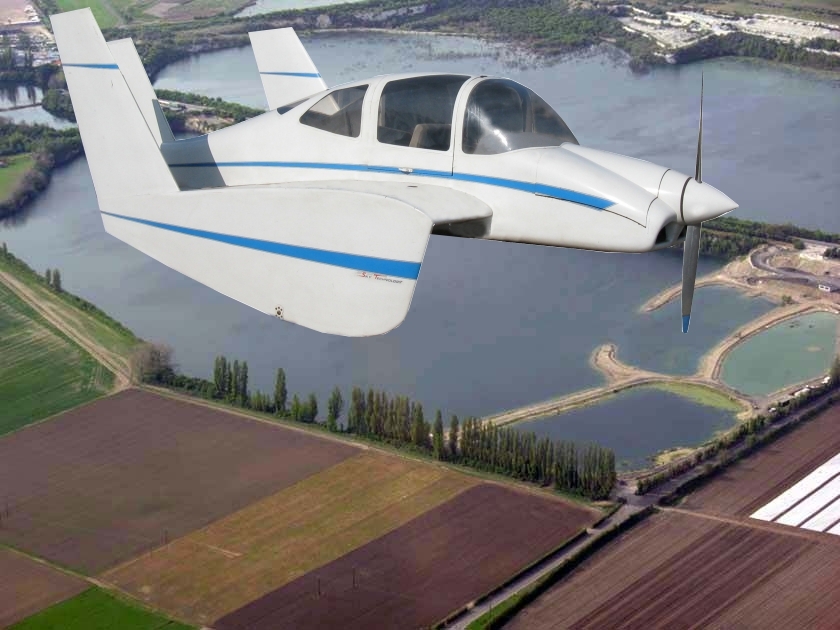 FLYING CARS - the dream of any driver stuck in a traffic jam and all sane pilots facing a dark and lowering sky.
Wacky inventors by the crate load have tried to design them, a few have actually built them and some have died trying to fly them. Yet despite all our modern technology, the production of a practical, safe and affordable flying car is still remote.

Is this the Beatles only 'real' Yellow Submarine in the World?

Beatles fans everywhere will be keen to see this life size exhibit when we have the museum open. It is available for event hire.

This crazy big fibreglass submarine shell was produced at Elstree Film Studios in the UK for the launch of the electronically remastered Beatles CD misic in the 1990's.

The amazing 'The Hoverhawk HA5'

This was the first ever mass produced two-seat hovercraft. Complete with gullwing doors, two rotary engines for thrust and another for lift. This combination together with the twin rudders made for one of the most manoeuvrable hovercraft ever built, even by today’s standards.

What can we say about this fantastic looking Submarine we have christened 'The Shark'. It comes to us in the UK all the way from Australia? Exciting, creative, inspiring? All of those together. Made from the drop tank of an F/86 Sabre fighter. This submarine is guaranteed to make the blood run faster.

The Benson Gyrocopter from the 1970's was one of the first mass production gyrocopters and came with an amphibious version. It came as a kit or a set of plans. Using a second small motor at the masthead to turn the rotor, it could be snatched off the water when the blades were revolving fast enough but woe betide you if you did not have enough forward speed on by that time to keep them turning and stalled.

This superb exhibit from the UK is one of the most aesthetically exciting designs we have ever seen.

Designed and constructed by  Alistair Cox around 1984 for his BSc (hons) university engineering degree, it displays some of the most  unique style orientated design features of any of our exhibits and was built totally from scratch.

The Croco - Ugly But Gifted 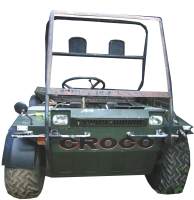 Pretty she ain't but the amazingly gifted she is, the Croco amphibious vehicle will climb mountains and boulders where no other vehicle can go, before fording a lake, with or without the optional propeller. So much so that the Swiss Army had a batch of these made to order from Germany in the 1980's.

These highly unusual vehicles are actually split in two. They have a back and a front section (tub) which although attached, can rotate independently in the vertical plane, via a huge fixed roller bearing in the centre. This means that one of the front wheels can go over something like a 60cm rock, while the opposite rear wheel can go over another rock of the same size! This is a truly amazing ability for a reasonably small vehicle.

This 20 plus year old, eight wheel drive Argo, is a wonder go anywhere vehicle. While it lacks design flair and is so flat that it looks as if something fell on it, we call it the 'astounding Argo' because that is exactly our thoughts when we first saw what these amazing machines could do.

Our thanks to Christian from Norfolk for this one and for the absolutely amazing demonstration he gave. Adam spent more time flying in the air, hanging on for dear life than he ever did actually sitting in the back. It still has him waking at night screaming! 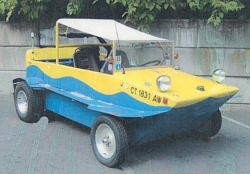 At last, a superb example of an amphibious car using a  hydraulic control system. This car is really crazy and exudes fun, just as they should do. It is only when you look at it carefully, that you can see just how amazing the build quality has been.

This is the only amphibious car example.