A real Beatles Yellow submarine. Beatles fans everywhere will be keen to see this.

We understand that this crazy big  fibreglass submarine shell was produced at Elstree Film Studio in the UK and used for the launch of the electronically remastered Beatles CD music in the 1990's.  We are unaware of any other real Beatles Yellow Submarine prop in the world associated with a real Beatles production.

Purchased by us from the 'cars of the stars' museum it had taken pride of place at their Edinburgh (UK) Highland Showground, for many years before the museum was closed.

Can any Beatles fan or anyone who worked at the Elstree studio, let us know more of its history please? contact us.

This  is not a true submarine but something to inspire and that is why we have it in the collection. The fibreglass shell comes complete with conning tower, pop up top, internal steps  and a heavy box section internal steel frame with small scaffold tower wheels to move it about. The submarine originally had a blue flexible skirt clamped around the bottom moulding to hid the wheels and one is in the process of being made up to take its place.

To get inside, you just roll under the back(well we do)! There is no door anywhere but once inside, the top opens and there is a hole in the nose and windows to see out.

Painted yellow all over, it  has  portholes painted on one side only for filming. There are  compressed air tubs on the front and back of the conning tower that might have operated a periscope and something else - perhaps someone can show us a photo to enable us to cpmpletely restore this unique Beatles exhibit.

It is now available for event hire - contact us for details. 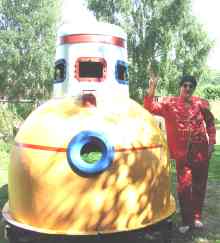